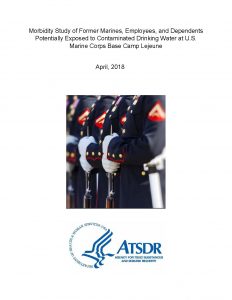 From the early 1950s through the late 1980s, the drinking water supply at Marine Corps Base Camp Lejeune in North Carolina was heavily contaminated with toxic and carcinogenic chemicals. After the contamination and its extent became public knowledge, the Department of Defense and other branches of the federal government conducted extensive testing and conducted numerous scientific studies to determine the impact of contaminated water on long-term health. term of residents and base employees.

Between 1953 and 1987, the U.S. Marine Corps base at Camp Lejeune provided residents and employees with drinking water heavily contaminated with industrial chemicals. Specifically, Camp Lejeune’s water supply during this time contained trichlorethylene (TCE) and perchlorethylene (PCE). Levels of PCE and TCE in Lejeune’s water were thousands of times higher than the maximum safe limits set by the EPA. It was later revealed that the water at Camp Lejeune was also contaminated with benzene.

It is estimated that more than one million people lived and/or worked on the Camp Lejeune base during the 34-year period in which the water supply was believed to be contaminated. These people include former Marines and their families who lived on base in short-term and long-term housing. They also include civilian employees who worked at Lejeune.

The chemicals contaminating the Camp Lejeune water (TCE, PCE and Benzene) are all known to be toxic to humans and animals. They are also known or suspected carcinogens and have been linked to higher cancer rates in animal testing.

The Agency for Toxic Substances and Disease Registry (ATSDR) is a federal health agency that is part of the CDC and the US Department of Health and Human Services (HHS). The ATSDR often functions as the investigative arm of the CDC and HHS, conducting research into emerging threats to health and the environment.

Following the discovery of the decades-old water contamination problem at the Camp Lejeune military base, the federal government came under intense pressure from veterans and various advocacy groups. In response, the ATSDR was instructed to conduct extensive research and testing to assess the potential health implications of water contamination at Lejeune.

Over the past 2 decades, the ATSDR has concluded several major retrospective studies to assess the impact of contaminated water at Camp Lejeune. Studies conducted by the ATSDR involving Camp Lejeune have included 2 mortality studies of military personnel and civilian employees of Camp Lejeune and a cancer incidence study.

The mortality studies were conducted to assess whether exposure to water at Camp Lejeune was related to increased rates of death from specific cancers and other diseases. The study reviewed medical records and identified the causes of death for more than 4,600 civilian employees and 150,000 military personnel who lived or worked at Lejeune during the period of contamination.

The study found that people exposed to contaminated water at Camp Lejeune had higher death rates for the following types of cancer:

In the sections below, we will briefly examine the results of each of them.

Based on the existing evidence, kidney cancer appears to have the strongest link to contaminated water at Camp Lejeune. The overall occurrence rate of kidney cancer among former residents and employees of Camp Lejeune was 2 to 3 times higher than in the control group. For study participants who were most exposed to TCE/PCE contaminants in water (i.e., those who worked or lived on base for the longest periods of time), the rate of kidney cancer deaths was 41 times higher than in the control group.

The study concluded that water exposure at Camp Lejeune led to an increased risk not only of kidney cancer, but also of other chronic kidney diseases. The study found that this conclusion was also supported by evidence from other studies. Approximately 80,000 cases of kidney cancer are diagnosed each year, making it the 8e most common type of cancer.

In addition to cancer and kidney disease, ATSDR studies found strong evidence that contaminated drinking water at Camp Lejeune was associated with an increased risk of bladder cancer. The bladder cancer death rate among Camp Lejeune staff and employees was almost three times higher than in the control group.

The ATSDR study of Camp Lejeune residents and employees found evidence that exposure to contaminated drinking water at Camp Lejeune caused an increased risk of leukemia. There was also a clear relationship between the level of exposure and the incidence rate of death from leukaemia. 9 of the 12 study participants who died of leukemia were classified as having high levels of exposure to contaminated water.

Leukemia (all types combined) accounts for an average of 60,000 new cancers diagnosed each year in the United States. This ranks leukemia 10e most common type of cancer. The 5-year survival rate for leukemia is 61%.

In addition to the mortality studies discussed above, the ATSDR also conducts a Cancer Incidence Rate (CIR) study. The purpose of the CIR study is to quantify the extent to which exposure to contaminated water at Lejeune caused higher rates of specific cancers. To some extent, the CIR study will overlap with conclusions already drawn from mortality studies. However, the CIR study will provide a fuller and more accurate picture of the extent to which Lejeune’s water increased the risk of developing certain cancers.

The CIR study was launched by the ATSDR in 2018 and was to last 5 years. To date, the ATSDR has not published the results of the CIR study (if there are any).

Congress is about to enact a new federal law called the Camp Lejeune Justice Act (part of the Honoring Our Pact Act) that will give victims of water contamination at Camp Lejeune the right to sue in justice against the government for their injuries.

If a member of your family may have developed cancer from the water at Camp Lejeune, contact our office today to see if you can potentially pursue legal action and obtain financial compensation. Call us at 800-553-8083 or contact us online.

The EU’s ‘restrictions roadmap’: the biggest ever ban on toxic chemicals